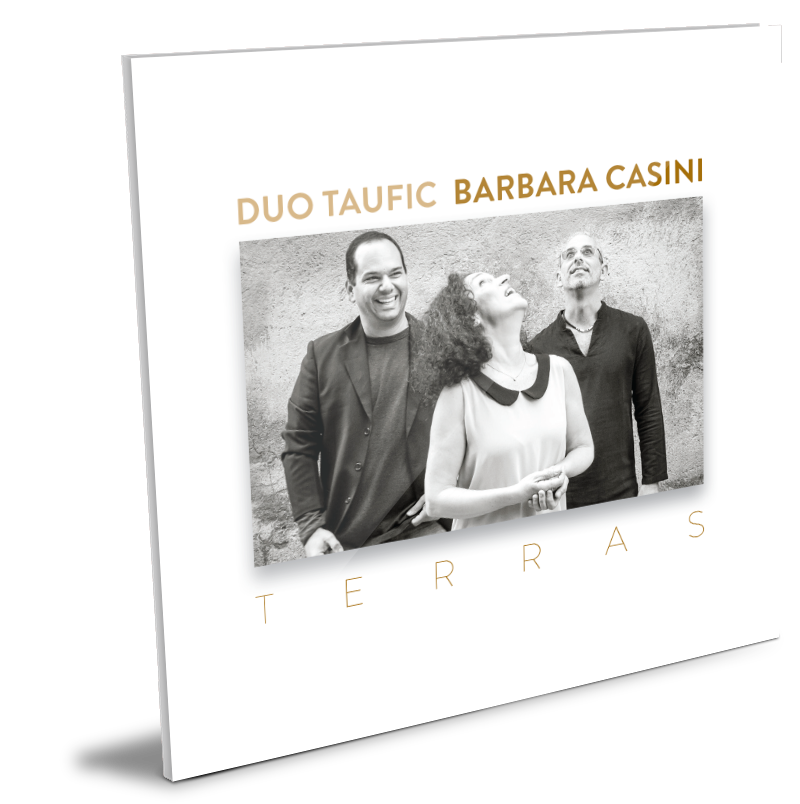 January 2016 sees the release of Terras, Duo Taufic’s first album with Barbara Casini, produced by Jando Music and Via Veneto Jazz. After several years of collaborating and touring, Duo Taufic, together with the most Brazilian of all Italian singers, record an album to celebrate the living tradition of a land: the Northeast of Brazil -  a metaphor of all the “terras” in  the world, where beauty and suffering are intensely mingled together. Duo Taufic and Barbara Casini do this with unequaled energy and love, which is felt in every note.

Barbara Casini, an exceptional singer, has always been in love with Brazil.  During her career of over thirty years, she has collaborated with great musicians in the international jazz scene such as: Enrico Rava,  Stefano Bollani, Fabrizio Bosso, Phil Woods, and Lee Konitz, as well as with renowned musicians in the Brazilian popular music scene, such as Toninho Horta and Guinga. She recorded about twenty albums and was among the first to introduce the Nordeste music in Italy: a music made of poetry, joy, rhythm, and dance but which also manifests the heart-breaking wistfulness that tells us of the pain and weariness felt in a land that is both unforgivingly harsh and overwhelmingly beautiful.

Roberto and Eduardo Taufic were born in that land: Brazil’s soul is their soul. When performing together, their sound blends in that perfect synthesis of talent and art, synchronicity, complicity, play and imagination.  Their indisputable fluidity permeates even during the moments of highest technical virtuosity.  Particularly celebrated in Brazil, the two brothers have been popular for years in Italy.

Eduardo, pianist, composer and music producer, has produced and arranged more than 400 recordings in Brazil and played with renowned Brazilian musicians, among which the singer Elza Soares and guitarist Ricardo Silveira.

Roberto lives in Italy since 1990 and has collaborated with a number of renowned artists in both Brazil and Europe: Gabriele Mirabassi, Maria Pia de Vito, Guinga, Enrico Rava, Gianmaria Testa, Rita Marcotulli, to name a few. He has recorded a number of CDs and played in Sergio Cammariere’s latest album, as well as in that of Rosario Bonaccorso, with Fabrizio Bosso and Javier Girotto, produced by Jando Music and Via Veneto Jazz.