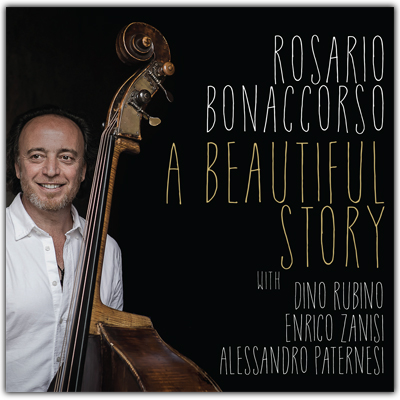 "A Beautiful Story"  is the title of the new album by Rosario Bonaccorso, produced by Jando Music/Via Veneto Jazz and set for release in January 2017. After the last album released in 2015, "Viaggiando" (Jando Music/Via Veneto Jazz), Rosario Bonaccorso has continued enriching and expanding his musical pathway and evolving his ideas as band leader and composer. After the first hearing of the album, his twelve outstanding compositions in "A Beautiful Story", immediately enchant the listener with their beauty and depth.  Once again, his music is smooth and powerful, and the listener is swept away into an overpowering yet refined, intimate universe. In this new album the double bassist is joined by a group of acclaimed musicians: his friend Dino Rubino on the flugelhorn, Enrico Zanisi on the piano and  Alessandro Paternesi  on the drums.  These young “lions” widely appreciated by critics and audiences on both  Italian and European jazz scenes, are sensitive and mature artists and despite their young age they boast of a rich variety of noteworthy collaborations and experiences. There’s a particular charm in the musical direction and in the refined sound of this quartet, where  the Italian flair for writing music is manifest and Rosario Bonaccorso represents this at its finest. With “A Beautiful Story” Rosario Bonaccorso allures the listener into a sonic journey filling heart and soul, radiating the myriad of emotions in his music.